Mr. Palmerio was born Aug. 12, 1949 in Philadelphia, Pa. Mr. Palmerio has been a resident of Sarasota for the past twenty nine years.  He is a graduate of the Pennsylvania Academy of Fine Arts, Philadelphia, Pa. and the Barnes Foundation, Lower Merion, Pa.  Studied Sculpture at the Frudakis Academy, and metal sculpture at Tyler School of Art, Temple University.  A roofer by trade, he also worked as a recreation leader for the City of Philadelphia, and he was the Director of Recreation for the Ute Mountain Ute Indian tribe in Colorado.  He has a private pilots license and also maintains a Master Captains boating license, having captained boats for 12 years.   He stared in the short film about an artist, A Lot in Common, which was in the Sarasota Film Festival, 2011. He taught painting in community arts centers in Philadelphia, and Colorado, taught two workshops in S.W. France and spent seven years teaching physically challenged adults, in Philadelphia.

He is in numerous private collections, throughout the country, The Coville Collection in Sarasota, the Grant Collection Md., the Havard Collection in Philadelphia.

Commissions include six large landscapes for the Acme Market Corporation in Great Valley Pa., 10 X 30 foot wall mural for the City of Philadelphia, Murphy Recreation Center, and two 12 x 40 foot murals for Motivation Inc. in the Orlando Airport, of the Atocha treasure ship and a 10 x 40 foot mural for Duval House B & B in Key West.  See Murals on Web site page.

He is a member of the Salmagundi Club, NYC, and is the Vice President of the Pines & Palms Thomasville Ga.  He was the Everglades Artist in Residence in 2003, and interviewed on National Public Radio, Arts Edition, with Amy Tardiff.  The Sarasota Herald Tribune wrote a comprehensive article on him in the Sunday edition of September 28, 2003.  He was on the Fine Arts Society Tour in Sarasota, in 2006, and again in 2009, and 2013, and was interviewed by Linda Carson of Channel 7 news.   He was voted in the top 100 Paint America show in the Coutts Museum in Kansas in 2010.  Mr. Palmerio was the artist in residence for the Great Sand Dunes National Park, in Sept. of 2011. He is the featured artist in the May 2011 issue of Scene Magazine of Sarasota. Won the   Annapolis Md. people's choice award in the quick draw competition in 2014. In June of 2013 the peoples choice award  in the Frederick Md. quick draw competition. First place in Tarpon Springs Quick Draw competition Nov. 2014,and 2017, &18 and won the quick draw competitions in the Sarasota paint out 2015, and 2016.  Joe exhibited in Steamboat Springs Co., 2018 in the Oil Painters of America National show, and  the National Oil and Acrylic Painter Best in America show in Bolivar Mo.

His painting donations have helped fundraisers throughout the country.  His plein air paintings emphasize a soft brushwork that captures the fleeting moments of nature. His Abstractions originate from the natural environment, which bursts forth into a dynamic flow of painterly rhythms.

Joe's painting demos and workshops and critique nights are well attended throughout the country. He is in constant demand as Juror, having judged shows 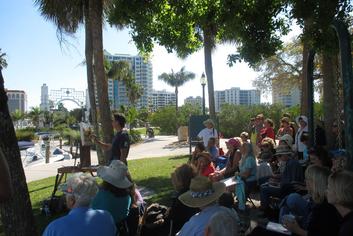 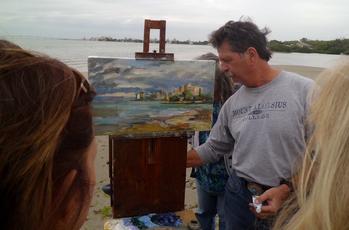 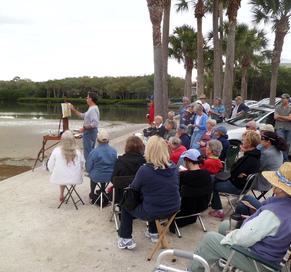 A Bit About The Artist 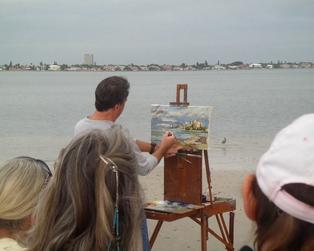